Betty Crocker I am not. Since the weather has been cold and stormy here lately, I thought that it would be wise for me to buy a slow cooker so that I could make soups and other warm treats to get myself through winter. During Black Friday I bought a nice little Crock Pot and a book of 200 recipes using the slow cooker. I was super jazzed about it. My mom is a slow cooking queen, and I have been having dreams about her homemade chicken noodle soup.

Instead of making chicken noodle soup (which is something that I know how to do) I thought I would make pot roasted chicken with veggies and potatoes. The boy was on night shift this week, so I thought something warm and hearty would be good, and help carry him through his shift. I’ve cooked dinner for him before, and it turned out just fine, so I really thought I had this in the bag.

Boy was I wrong.

So, this is what the meal was supposed to look like:

It just had to simmer for 5 hours with the veggies, some chicken broth, herbs and lemons. Easy. Really easy.

Here is what it looked like at the start:

This what it looked like at the end, and I was so grossed out, I couldn’t even serve it. I tasted some of the meat, it was tender and cooked all the way through, but then it was bland, and much of it was soggy and gross. The potatoes were over cooked, and the other veg was soggy.

Major fail on my part. I may actually puke just from the reminder.

The boy was a good sport. He did eat one bite and tell me it tasted good, but then we called for Chinese, walked next door to pick it up, and laughed our way through the meal. I was proper sad about my lack of skills for a bit, and did a bit of moping, but he was really nice about it all, and even now, a few hours later, as I munch on cold spring rolls and prawn crackers, I am laughing to myself at how bad it turned out. I’m also really glad that I have leftovers for tomorrow….as well as loads of dishes. 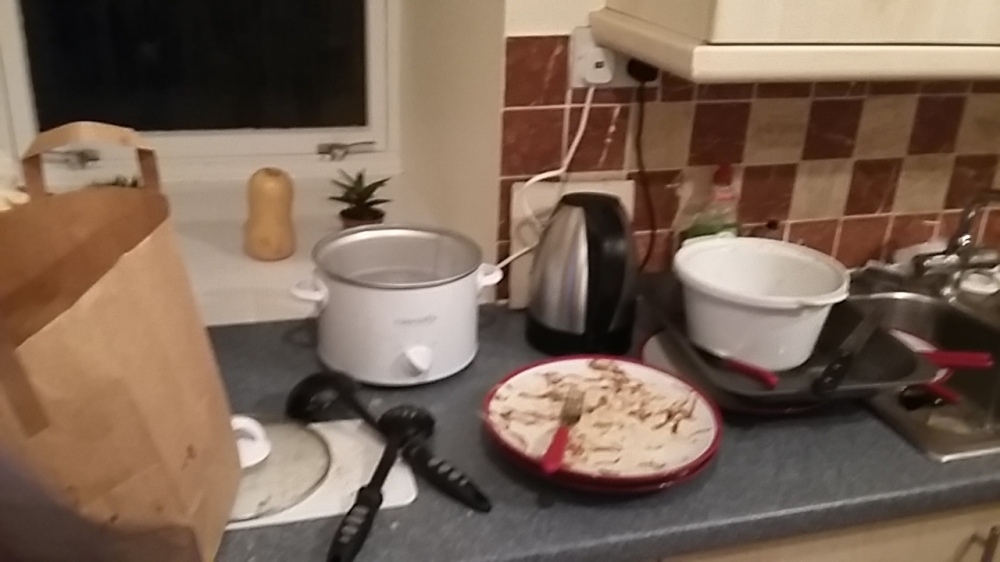 So I learned a valuable lesson today. Just because I own a slow cooker and a cookbook doesn’t mean I can make 5 star meals. All well. One down, 199 recipes to go. Next up: chili black bean stew.