I’m not even sure when the last challenge was. I have been so focused on getting draft chapters of my thesis done, that all I really do is work on that and then binge watch bad TV. My goal is to have 30 thousand words written by the end of this month, but I am starting to think that is a pipe dream. I’m a little over the halfway point, but I am finding it harder and harder to actually motivate myself to sit down and work on my theory chapter. If anyone wants to write it for me, please let me know. I’ll happily let anyone work on it at this point.

It should come as no shock to anyone then that the challenge this week is to write about something I am procrastinating on. I am not putting nearly enough into working on my thesis. There is a reason.

Or, at least, what I think the reason is anyway.

I have no motivation to finish my thesis because the moment I finish my thesis is the moment that I stop being a student and my visa ends. When that visa ends, I am no longer eligible to live in Scotland without full-time employment and someone willing to sponsor my work visa. Given the current thoughts and feelings on immigration all over the world right now, I am having some trouble being optimistic.

My therapist seems to think I will have no problem finding a job, but really, a thousand people can do my job, and they are all here in the UK already authorised to work in this country.  I will probably have to go back to the US where I have no money, only a couple of friends (who don’t even really live in the area) and no job. My family is there, and that will never ever be a bad thing, but it would be really hard for me to adjust to living in the United States again. I am still traumatized from the last time I lived there full-time. So now that I have wasted some time not working on my thesis, and not really writing anything of substance, I think it is time to share something good with the world.

That would be my new nephew JJ. He arrived on the 24th of July, after 9 months of the cushy life in a warm safe place, and he is a little charmer. I’ve only met him over Skype, and believe me, that killed me, but he’s cute, likes to be wrapped like a burrito, and is already making his mommy crazy.

In other words? He is perfect.

See? Perfect. It is August, which means that the festival is here. I have a slew of funny free shows to see, and since all I have seen all summer is rain, I am hoping that a little free comedy will help me find some motivation for my writing.

First up? A group of comedians playing board games. It’s a live action version of TableTop, which I love, so even if it sucks it will probably still be pretty good.

We spent a lot of time in Greece, and it did not disappoint. The first stop we made was to the town of Kalabaka. The draw here was Meteroa (which translates to middle of the sky), the giant rock formations that house some intense Eastern Orthodox Monasteries. The views were beautiful, and it was very interesting bit of history. Women had to be in dresses and have their shoulders covered, and I even saw the skulls of the monks who had lived there before. The people who live there have some crazy net and pulley systems to lift supplies from the bottom of the rocks to the tops where the actual buildings are now. The monasteries were built by hermit monks in sometime in the 11th century, although the exact dates are unknown. One of the monasteries was used in the James Bond film For Your Eyes Only.

There was some blatant sexism going on at the monasteries, so much so that it almost ruined my time there. I do not mind dressing respectfully (having my shoulders covered, not wearing shorts), but one inside being made to feel uncomfortable to the point of actually having to leave a church was not really my cup of tea. Luckily the views made up for some of that feeling.

The monastery trip was also my first encounter with a drop toilet. I know, I know. I’ve lived a pampered life. I’ve heard horror stories from friends of mine who have traveled through Asia, and because the bus did not have a toilet on it, I got in the habit of using the toilet before we left anywhere just to be safe. Peeing in a drop toilet when you are a girl is trip and a half. Add to that that I was in a pencil skirt and had to worry about the lack of real door on the stall, I am proud to say that I survived and did not embarrass myself. 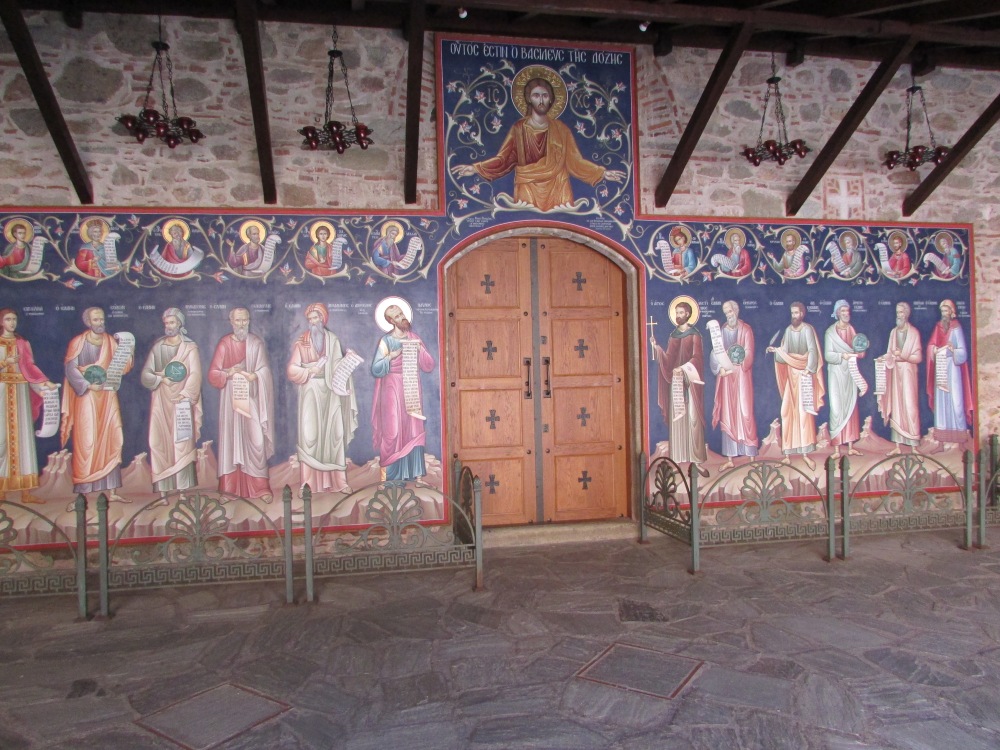 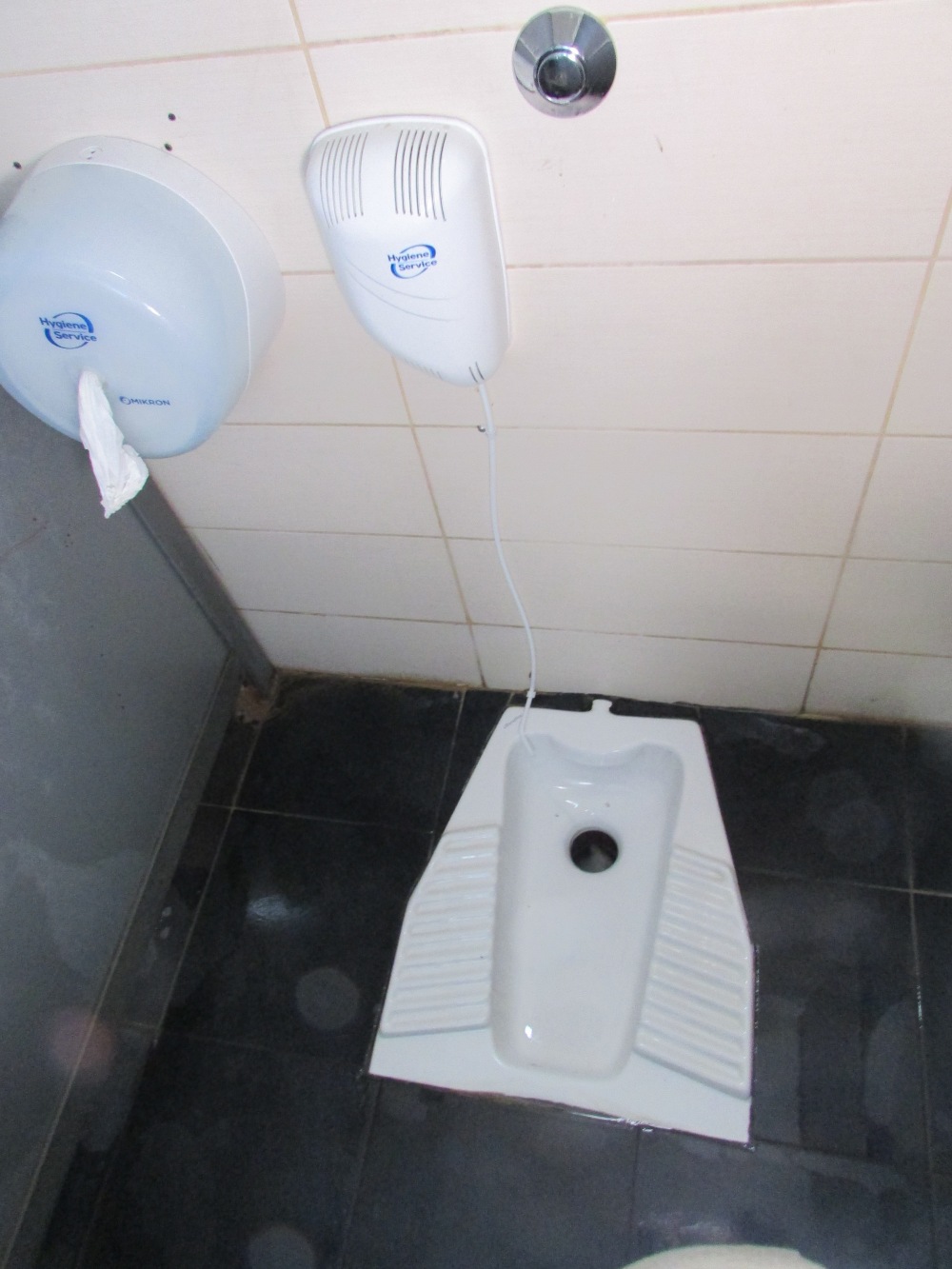 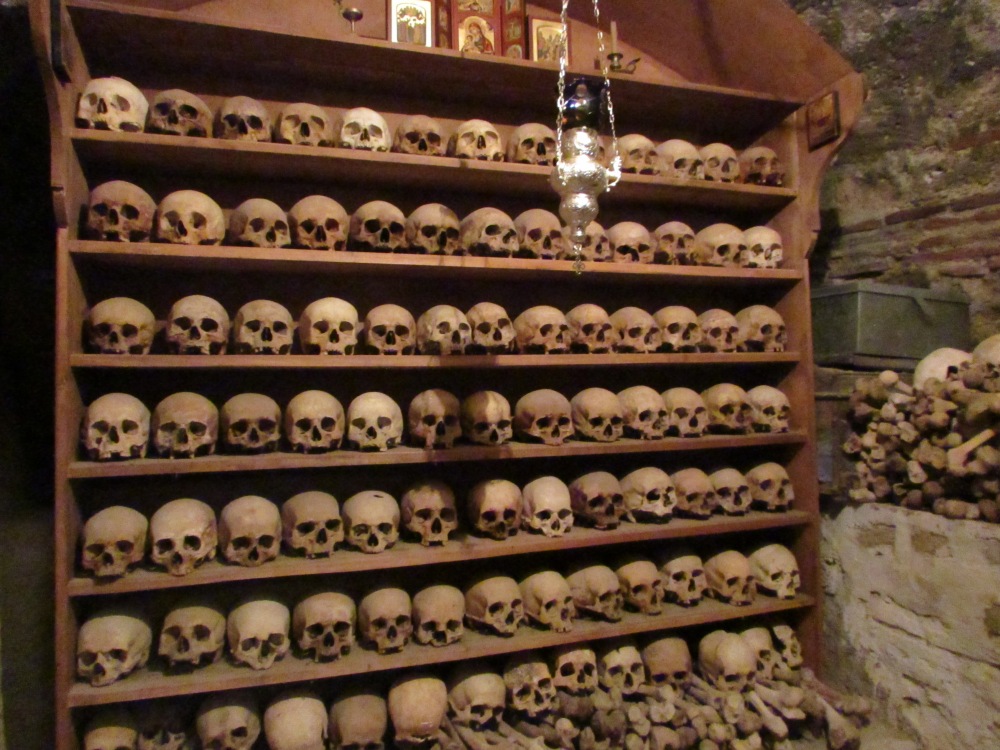 The second place we stopped was Thermopyle, which was made famous  by King Leonidas of Sparta, and the Persian Empire of Xerxes I over the course of three days, during the second Persian invasion of Greece. It took place in August or September 480 BC (think the movie 300 for a really really rough idea of what happened there). There is no longer a coastline there, but there is a statue dedicated to Leonidas.

From there we made our way to Athens. According to Visit Greece:

Athens is the historical capital of Europe, with a long history, dating from the first settlement in the Neolithic age. In the 5th Century BC (the “Golden Age of Pericles”) – the culmination of Athens’ long, fascinating history – the city’s values and civilization acquired a universal significance. Over the years, a multitude of conquerors occupied Athens, and erected unique, splendid monuments – a rare historical palimpsest. In 1834, it became the capital of the modern Greek state and in two centuries since it has become an attractive modern metropolis with unrivalled charm.

A large part of the town’s historic centre has been converted into a 3-kilometre pedestrian zone (the largest in Europe), leading to the major archaeological sites (“archaeological park”), reconstructing – to a large degree – the ancient landscape (http://www.visitgreece.gr/en/main_cities/athens)

We stayed in a hostel situated in a funky little neighborhood. The rooftop bar boasted an amazing view of the Acropolis. By the time we reached this spot, I had made friends with a few of the people in the group, and one couple loved playing games, so I broke out Sushi Go!, a game that I first saw on TableTop.

We played several rounds of the game, had some beers and enjoyed the evening. We then had a full day to ourselves and a map of the pedestrian zone with all of the top sites marked for us. A merry band of 6 decided to do as much as we could on the master pass of Athens.

Turns out, if you are a student with a valid ID, all of the sites are free to visit. I saved thirty Euro, but even then, I thought the price was worth it. We started at the Acropolis. There were a lot of people there winding through the entrance, but once we made it in, it was much easier to move around. 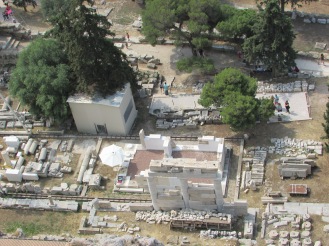 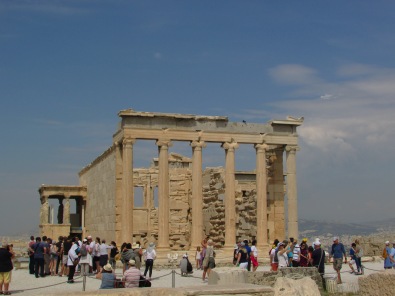 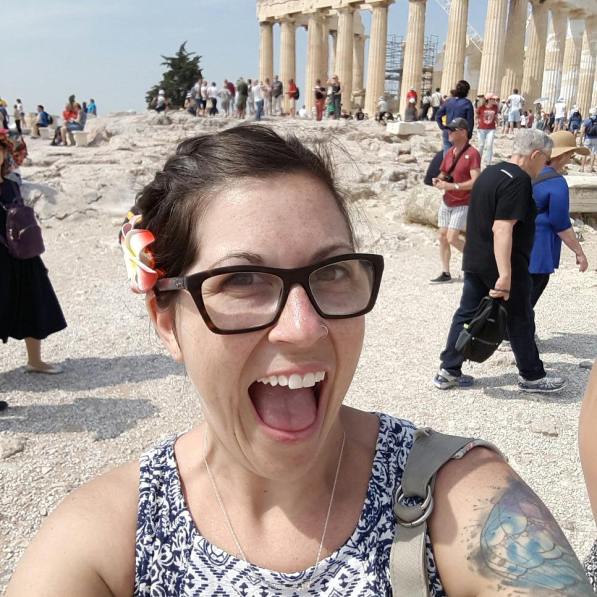 I was a little sad to discover that my university WiFi worked up there. All of the people on the internet and editing selfies to post on social media seemed to be really missing out on the history and the amazing sites. A lot of them didn’t even bother to read the signs of what they were looking at!

We then continued our trip to Hadrian’s Library. It was founded by the emperor in 132 AD. Now it is in ruins, but you know me, I love a good library. When my mom and brother came to Scotland to visit me a couple of years ago, we went to Hadrian’s Wall in England, so I thought it was only fitting to see some work that he did where he lived. We had some gyros and enjoyed some amazing fresh squeezed juice before continuing on to the Temple of Olympian Zeus. 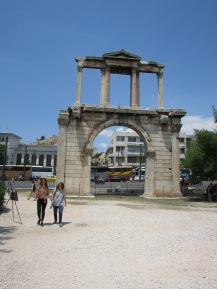 From there we walked to the Olympic stadium. I had just seen it on a TV show, so getting to walk around the track was a fun thing to check off my bucket list.

My mother tells me that this is the photo of the trip. I def over committed to this shot. The landing was really hard on my feet.

I ended the tour with a little trip to the tattoo shop. I had thought about getting a tattoo while I was on holiday, but didn’t think I’d have the time. When I passed the shop though, I knew I was in the right place. The tattoo artist made jokes that I was clearly looking for them, and that he saw a lot of open canvas to work with. He then looked at all of my tattoos and decided that I had a really unique collection that matched my really unique soul. He didn’t know it, but that was the nicest thing that anyone could say to me. The shop even took a photo with PRC (you can see them here https://www.facebook.com/piraterubberchicken4/) and even showed me their pirate tattoos to match. I left the shop with a paper airplane to match my world map and an intense like for the tattoo artists of Athens. 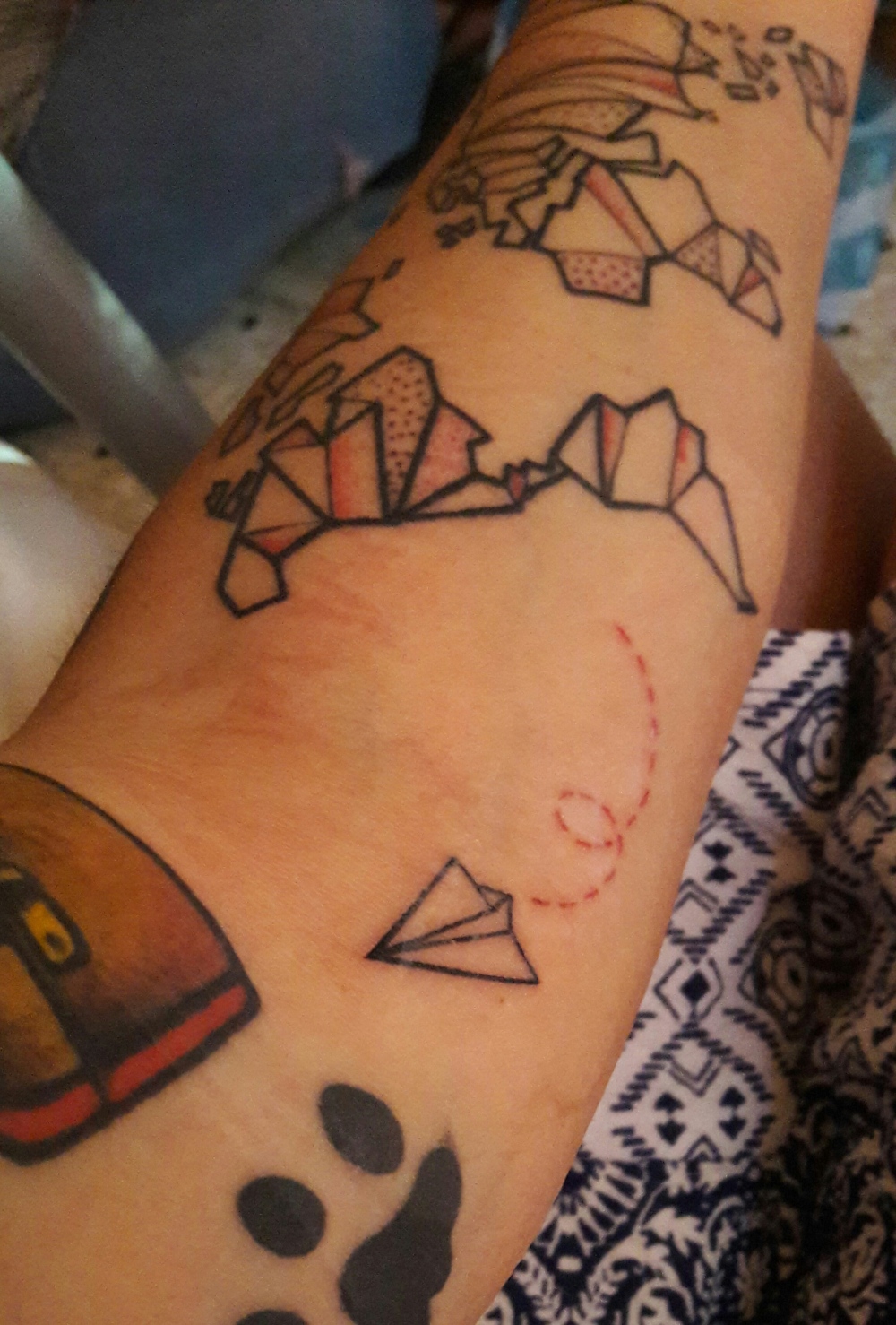 I ended up getting roped into a group dinner at a cheesy tourist restaurant, and because I was sitting in the danger zone, I ended up dancing with a Greek dude. He then tossed me over his shoulder and spun me around. Luckily I was able to cover my butt so I didn’t flash the masses my underwear (or maybe it was just a good thing I was wearing it!). I hate forced cultural immersion and will just keep the video of my dance efforts to myself.

Next on the list was a visit to Delphi to see the oracle and see the great Temple of Apollo. They have an amazing museum, but what I will remember most about this stop was the amazing tour guide. She was full of great stories, but felt that it was her responsibility to talk to us about the balance between tourism and being able to see the history and preservation.  She wanted us to think about what we were seeing and at what cost. She also wanted us to make up our own mind about what were seeing, and what we believed in terms of the myths and legends surrounding the place. She was so full of enthusiasm and love for her job that even though I remember very little of the history she gave us, I will do some more reading about the place. 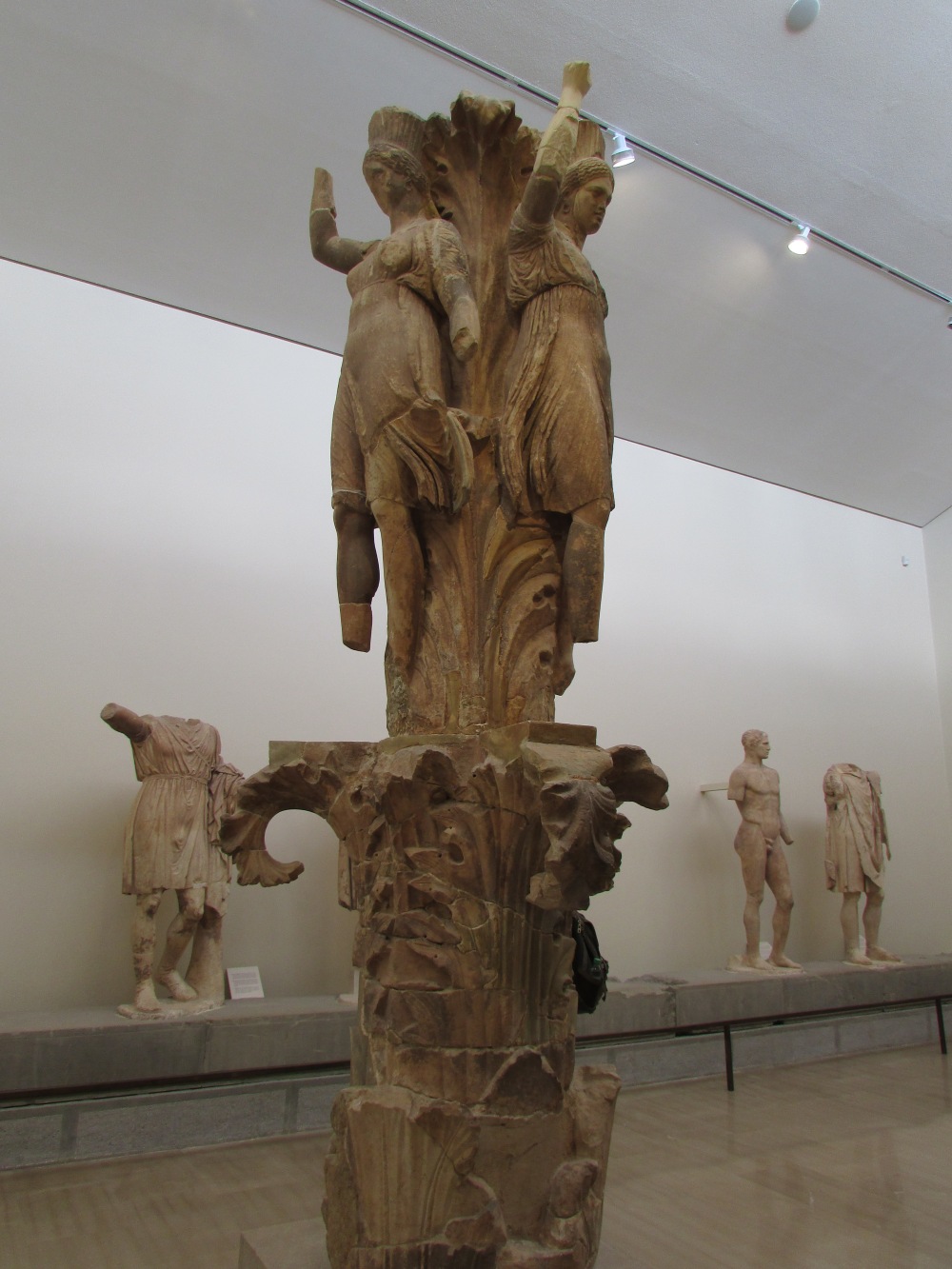 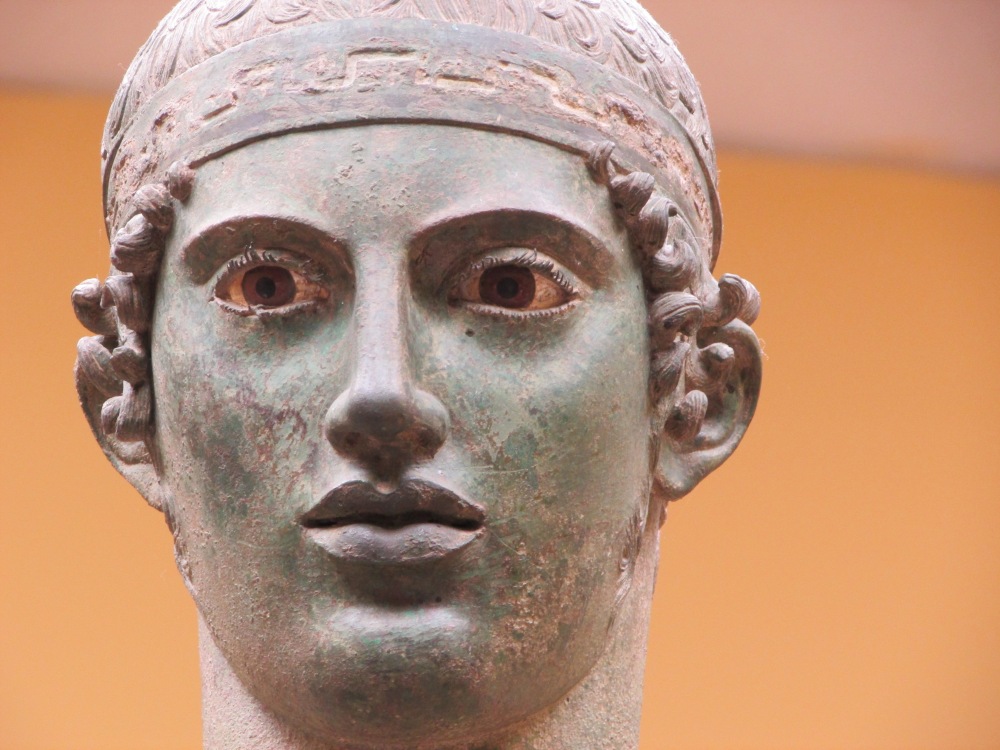 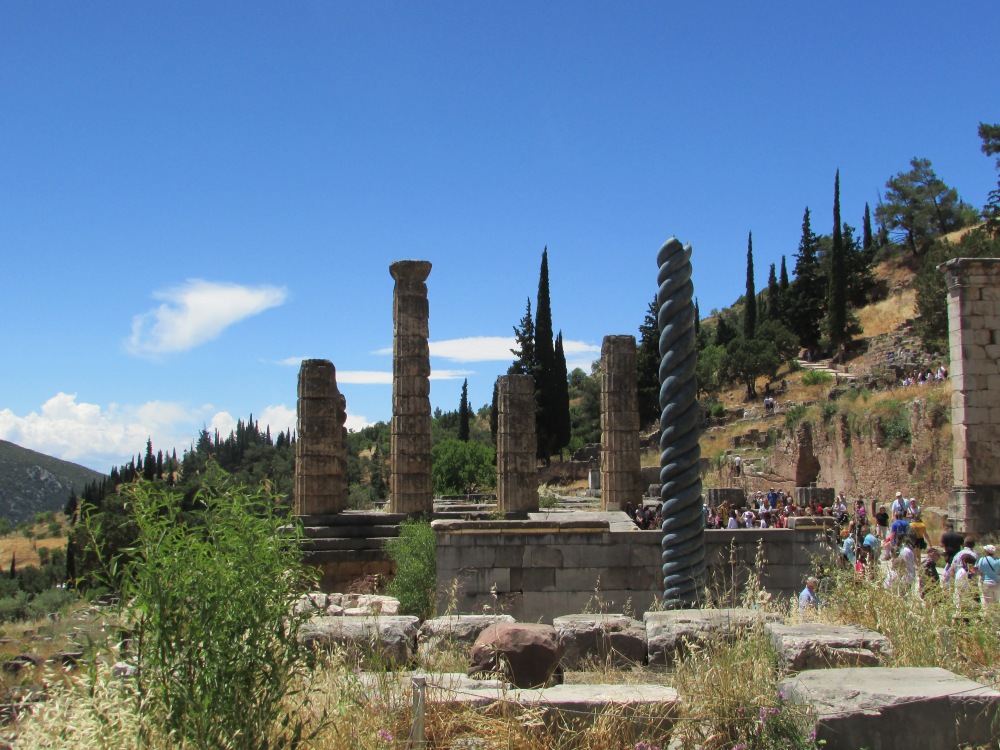 Our last stop in Greece was to a town called Thessaloniki. It is the second largest city in Greece, and the capital of Greek Macedonia. Apparently it is a nice place.

For me, it is a hellhole.

We hit a lot of traffic and got to the town late at night. The bus had some trouble navigating the streets because people double parked and generally didn’t care, and the hotel that we stayed at was cot beds in small offices (or at least, that is how it seemed to me). I don’t remember anything that I saw in the town, and I am not that upset about it. I was a bit of a grump in that overnight spot.

I loved my little wander through Greece and can’t wait to go back and visit the islands and swim in the warm clear water.