I woke on day 3 feeling sore. I was not used to walking so much and not just being sat in front of a computer all day, and my poor feet were mad at me.

My first stop was at the Jewish Museum. I try and visit the Jewish quarter of every country that I visit, and the Jewish culture in Vienna is especially important as they were all but wiped out by the Nazis during WWII. The first museum houses the remains of the temple that was destroyed in 1421 and marks where the Jewish quarter used to be. At that time, Jewish people were rounded up and murdered, and their history and culture long buried.

The museum also includes a look at the Jewish culture today and how people feel about living in Vienna. One of the exhibits was called The Vienna Rothschilds. A Thriller. According to the museum:

‘The exhibition presents the history of the Rothschild family in Vienna and Austria. Since the activities and accomplishments of the Viennese Rothschilds have faded from memory, it is important to call them to mind with this exhibition and to make their traces visible.

The rise of the Rothschild family began in the early 19th century with Mayer Amschel Rothschild, a Jew from a humble background in Frankfurt. He carved out a career through hard work and sent his five sons out into the world, one of them to Vienna: Salomon von Rothschild. As a banker to the Austrian State Chancellor Metternich, he quickly became one of Austria’s leading entrepreneurs. The name Rothschild served as a positive symbol for a Jewish success story, but also a negative cliché in antisemitic propaganda.

The story of the Rothschilds in Vienna and Austria reads in parts like a thriller. They had to assert themselves against competitors, became ensnarled in conflicts and were confronted with antisemitic stereotypes. But they repeatedly stood up for their oppressed and persecuted fellow believers and established numerous educational and charitable foundations for the general public.

In 1938, the Gestapo arrested Louis Rothschild and held him hostage for a year to extort the Rothschild’s entire fortune. After the end of the Second World War, a large part of their stolen property was restituted, but they had to forcibly “donate” important works to Austrian museums. The restitution proceedings have dragged on to this day. Yet the story of the Rothschilds in Austria continues.’

I’d never heard this story before, and it was ridiculous. Imagine being robbed and then robbed again under the guise of ‘donating’ to museums for the enjoyment of others. The way that Jewish people are treated in some countries is almost beyond comprehension. My next stop was at the Shoah Memorial. It is in the centre of the Judenplatz (‘Jews Square’). The memorial is beautiful and tragic at the same time. British artist Rachel Whiteread designed the memorial. Around the outside of the memorial are the places in Austria where the Nazis murdered Jews and the memorial itself looks like a large concrete cube, but if you look closely you will see ripples in the cube that look like books. There are 65,000 books, one that represents the story for each of the Jewish people who died in one of the camps.

Once I had gotten my spiritual fulfilment, I walked to the Albertina for more art. I almost skipped this museum. I’m not sure what made me go in, but oh boy, it was one of the best parts of the trip. The Albertina holds amazing works by Monet, Picasso, Cézanne, Degas, Klimt, Kandinsky, Miro and Warhol. Basically all of the artists that I love. I had no idea that there were so many Warhols in Vienna, and even more shocked to see three Miros! He is my favourite artist. I have one of his paintings tattooed on me. This little unexpected surprise was amazing. I could have cried I was so happy.

I gave my poor feet a break and spent the rest of the day enjoying the funky hotel and eating cake. I really wanted to plan some day trips one to Czechia and one to Slovakia so I spent the evening trying to figure out if there was a way I could make it happen. I miss the pre-Covid days when it was just a matter of getting on a train or a bus. Czechia was unfortunately ruled out pretty quickly because of their Covid test rules, but I was able to figure out how to get to Bratislava quite easily. God love public transportation.

I have been really lazy the last few weeks. I survived summer school and the qualifying exam, and settled in for a couple weeks of doing nothing that related to education.

To start my celebrations, one of my best friends from Scotland came to visit me. She is currently living and working in Estonia, but was in the US visiting her mom, and I was able to get a few days with her. I hadn’t physically seen her in over a year, but picking her up at the airport was like no time had passed at all. It was a good chance to catch up, plan my trip to visit her in November, and be around someone who reminds me of Scotland.

I asked her what she wanted to do before she got here, but she just kept telling me it was up to me. I got to be a tourist for a few days, which worked out well for me because it reminded me that being here is not so bad.

We started the visit with a trip to LA to see some van Gogh and Kandinsky. I love art, and she wanted to be in LA, so it worked out well. After we hung out with some art, we went to the Union Square Market to try the best iced lattte in the world. It was good, but the authentic Mexican food was better. 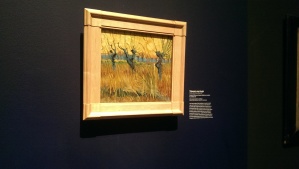 van Gogh at his finist 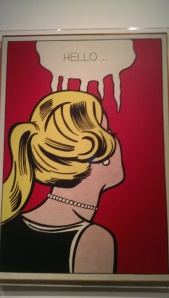 I got up close and personal with a Warhol. I can die happy. 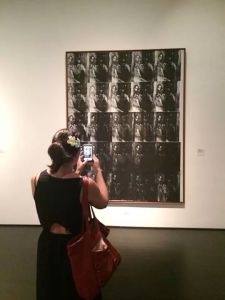 This Kandinsky would look amazing on my wall

The next day we hit the Huntington Beach to soak up some sun and eat some more tasty Mexican food. We met a nice group of baseball players from Oklahoma, and had avoided sunburns. 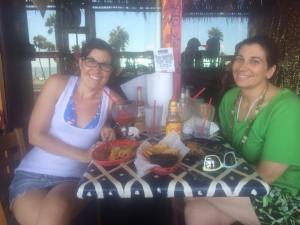 I got Sus to kiss Duke. He seemed to enjoy it.

The last day of our visit was spent at Disneyland. She hadn’t been since she was 8, and it was a nice chance for her to get to meet my sister. While we were waiting for the tram, we met a nice father/son combo from Glasgow, and I got 15 minutes of wonderful accents. 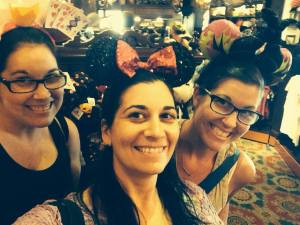 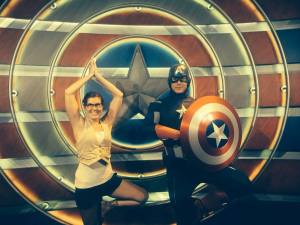 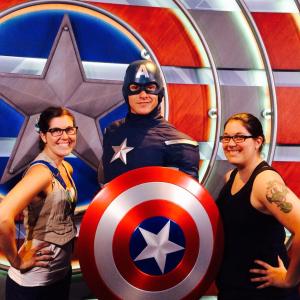 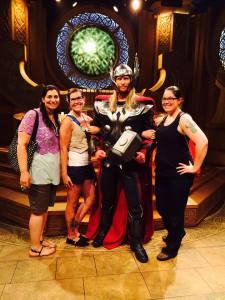 The visit was way too quick, but it will hold me over until I get to Europe in November. I had so much fun with her, and was so glad that my first bit of time off in two years was spent being a tourist with her.