I know, I know, the thought of me in a chapel is a funny site to see. Trust me, I would have felt out of place if the chapel wasn’t such a tourist attraction. Rosslyn Chapel is by no means a large place, but thanks to Dan Brown’s Da Vinci Code the chapel is now a hot spot for conspiracy theorists, religious scholars, and loves of popular culture. According to my favorite site Wikipedia, Rosslyn Chapel is described as:

Rosslyn Chapel, properly named the Collegiate Chapel of St Matthew, was founded on a small hill above Roslin Glen as a Catholic collegiate church (with between four and six ordained canons and two boy choristers) in the mid-15th century. Rosslyn Chapel and the nearby Roslin Castle are located at the village of Roslin, Midlothian, Scotland.

The chapel was founded by William Sinclair, 1st Earl of Caithness (also spelled “Sainteclaire/Saintclair/Sinclair/St. Clair”) of the Sinclair family, a noble family descended in part fromNorman knights from the commune of Saint-Clair-sur-Epte in northern France, using the standard designs the medieval architects made available to him. Rosslyn Chapel is the third Sinclair place of worship at Roslin, the first being in Roslin Castle and the second (whose crumbling buttresses can still be seen today) in what is now Roslin Cemetery.[1]

The purpose of the college was to celebrate the Divine Office throughout the day and night and also to celebrate Holy Mass for all the faithful departed, including the deceased members of the Sinclair family. During this period the rich heritage of plainsong (a single melodic line) or polyphony (vocal harmony) would be used to enrich the singing of the liturgy. An endowment was made that would pay for the upkeep of the priests and choristers in perpetuity and they also had parochial responsibilities.

In later years the chapel has featured in speculative theories regarding Freemasonry and the Knights Templar.

The tour guide of sorts at the chapel told us some funny stories about what people think is buried in the vaults under the chapel. People think Mary Magdalene is buried there, the embalmed head of John the Baptist, of Jesus, and one woman from Tennessee thinks that the body of Elvis is there. It has been said that there is a space ship and a hundred little green men there, untold riches, and quite possibly, the Holy Grail. While I don’t believe any of that, it was fun to hear the tour guide share the crazy ideas tourists bring on their visit. There is no photography allowed in the chapel, but I was able to take some really good pictures of the day. The chapel, castle ruins, and small glen in the area provided some much needed fresh air and a great day with my friends. It was a nice way to spend my last weekend in Scotland…even with the little bit of rain. 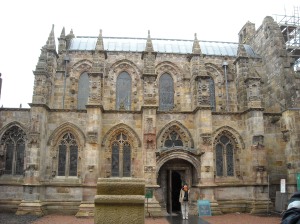 My own hidey hole in the castle ruins

Crossing the bridge into the glen

Tomorrow my journey through the best of Scotland will continue. The BFF is taking me home to the lovely metropolis known as Dundee to meet his mama. We have a whole day to ourselves for bonding and good banter. I’m looking forward to meeting his friends (they are excited to meet a “real” American), see where he grew up, and meet his grandma. I’m hear she makes a mean cup of tea…..