Okay, so day five was a couple of days ago, but I was too busy moping about having to go home and face the real world to sit down and write. I’m also overcoming traveling without the use of steroids in my system, and that is a bit of an adjustment process. I’m feeling more pain then I have in the last 8 years, so that takes a little getting used to….or maybe it is because I am about to turn 30 and I’m just getting old.

Day 5 in Budapest was a really important one for me. I was staying in the Jewish Quarter, and had already wandered around the district, but on day 5 I got to visit the Great Synagogue. I was hoping that I would get the chance to go in since I tried to see it the day before Christmas and it was closed. It was a lot of fun to be there during Hanukkah and seeing Jews from all over the world come to sit in the pews and admire the place. the synagogue was built in the 1850s, and was modeled on Moorish architecture with influences from Islamic culture in North Africa. When I first arrived in the city and saw the building, I thought it was a mosque. Inside it is fairly simple and unpretentious, but there is a lot history in it. Within the gated walls of the synagogue is a cemetery. While that is not usually done, an exception was made for the people that died in the ghetto during WWII. The synagogue was behind the ghetto wall, and acted as a sancuatary for many of the Jews. The bodies of about 10,000 Jews were found in the area. Many of them were moved to a cemetery, but 2,000 were buried in the garden. There are tombstones for those who were able to be identified, but there are plenty buried there that were never identified. 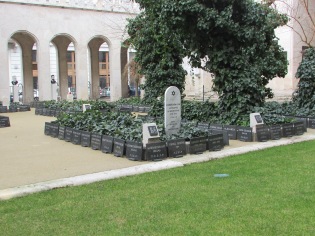 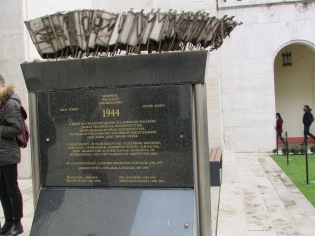 While I could go on and on about the synagogue, what really struck me was some of the people visiting. While I was on my way out I heard a guy complaining because, “once you’ve seen one synagogue, you’ve seen them all.” He was American. Go figure.

This made me angry. I don’t say that when I am dragged through churches on guided tours, or have to listen to how amazing and great they are. I’m respectful and make sure my shoulders are covered, that I do not taken chicken out and that I do not do anything that would be offensive. I wish that people had that same respect for my culture and religion.

I bought a new Hamsa necklace and then spent the rest of the day walking through the Christmas markets one last time with the express intent to eat my way through them. I was able to cross another things off my list by eating an exotic meal. I sampled a Romanian Kürtőskalács, a circular cake that is warm, large and tastes like a churro. There are different coatings you can get, but I opted for Cinnamon and was not disappointed. I also had a Hungarian version of a gyro which was perfect. It was tasty, warm, and the size of my head.

I had to roll myself back to the hotel. It was worth it though.

But now I am in Scotland and having to face the reality of going back to work and being a student again. I don’t really want to. I have zero motivation. I’m just wishing I could fast forward through the next two years and be done with the thesis. Of course, then I would have to find a job, and who knows what or where that will be. I’m more than a little terrified of the future.