According to Sacred Destinations:

Córdoba’s old Jewish quarter (Juderia in Spanish) consists of a fascinating network of narrow lanes, more atmospheric and less commercialized than in Seville.

The Jews were established in Cordoba in Roman and Visigothic times. Under Arab rule after the 8th century, Jewish life and intellectualism flourished.

Hasfai Ibn Shaprut, a Jewish doctor, diplomat and scholar served under the Moorish rulers and attracted intellectuals to the court. His family’s subsequent wealth and power were major factors in the wealthy and vibrant Jewish community of Cordoba at that time.

Maimonides, the most famous Jewish philosopher and author of the Mishneh Torah, was born in Cordoba in 1125. A statue to his honor stands in Tiberiadus Square in the Juderia.

The entrance gate, La Puerta de Almodavar, has a statue of Seneca and forms part of the western boundary of the Juderia. The Juderia reaches as far as Calle El Rey Heredia to the northeast and the Mosque to the south.

The main attraction of the Juderia is Cordoba’s ancient synagogue, on Calle de los Judios (Street of the Jews).

Today the Juderia is also known for its jewelry and silversmith shops.

Finally a place that I wanted to visit. The synagogue was a small building, and it is no longer in working order, but it was beautiful. Spain is not a place that loves the Jews. Before coming on the trip, we were warned about wearing our Star of David, and saying anything about being Jewish, and for the last ten days, I have seen nothing of the anti-Semitic attitude of Spain, but today I was able to see it a little bit. In Cordoba, there is just the one, and in Seville, all of the Jewish temples and synagogues have been turned into churches, convents, restaurants, and even a parking lot. The tour that we are on is full of people all over the world, but my mom and I are the only Jews. When we were on the walk with the group, they did not want to go to the Jewish quarter, and when we were there, they took pictures of all of the crosses that have been put up in the quarter. They did not appreciate the history, and the significance of the area, and when we  passed the statue of Hasfai Ibn Shaprut, the group made jokes about rubbing his feet to shine his shoes or win the lottery. Jewish people rub his feet for good health, and because he is a well respected member of the community. 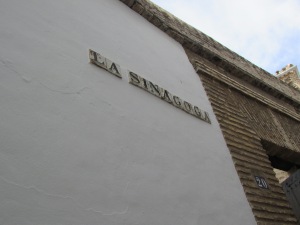 I have seen more churches and cathedrals than I care to count, and I have been nothing but respectful to the site. I am not a Christian or a Catholic, but I can admire the beautiful buildings, and the importance of each of the buildings to the people who embrace the religion. I do not make jokes, take pictures with the rubber chicken, or make fun of anyone who stops to pray at any of the alters. I was raised to respect other people and their beliefs and customs, whether I understood them or not. I was ready to scream today. I could not believe that these grown adults acted this way. My dad told me to let it go, but it really got me all riled up. I’m way behind in the detailing of this trip and all of the things that I have done, but this was one thing that I really really really wanted to do. I almost let these people ruin it for me.

This was the first time in 10 days that we had a chance to slow down a bit and really explore our surroundings. I loved Corduba and Seville, and was glad that we had an honest chance to take in the culture. I have been running nonstop since June 5th, and I have somehow managed to catch a horrible cold, and I am still trying to sort out the problems with the visa for my upcoming move to Scotland. I’m stressed, scared, in a lot of pain, and have to be on the move again in 12 hours. I’ve seen so many things that they all seem the same, and if it wasn’t for Google and the hundreds of pictures I have taken, I would have forgotten what I saw. We still have 7 days of rushing from city to city in Spain, and I am not sure I am going to make it if I have to see one more church on this trip.

But today we got lost in the city, and found something incredible. Today I got to see a little bit of the tortured Jewish people in this beautiful place.